Within the Toyo Club, Kanekichi Yamamoto’s leadership was not question. It was a move planned by Yamamoto himself, years ago. When Yokoyama succeeded Yamada as the head of the Toyo Club, Yamamoto knew then it was not his time. He did not fight nor did he object to Yokoyama’s insertion at the top. It was a position that he would have to earn, through deeds and politics. To vie for control then in 1928 would not have been prudent. Instead, he established himself as Yokoyama’s trusted consigliore and right hand man. As such, he was able to exert much influence on Yokoyama and the direction of the Toyo Club. He knew that growing the opium business as the important cornerstone of money, power, and influence was key to his goals to some day take control. The opium business would be the key to managing control internally as well as the vehicle to exert control externally – e.g. keeping Capone and the Little Tokyo Club at bay, preventing encroachment into the Toyo Club’s business.

With Yokoyama’s mysterious automobile accident, Yamamoto was clearly in charge. It was a fortuitous unexpected event, resulting in a abrupt change of power. When a transition plan is in place, it appears to be a smooth orchestrated event. Behind the scenes, of course, politicking, force, ugliness, and in the case of criminal mob businesses, violence, are often the means used to determine a new leader. With the surprise death of Yokoyama, there was none of this. Yamamoto had prepared, there was no other heir apparent, and Yamamoto assumptively took control. Moving the Toyo Club around the corner was a calculated and symbolic move of his new power.

Having the heads of the Los Angeles based Tokyo Club, including its head, M. Sera, meet Yamamoto immediately upon Yokoyama’s pronounced death was yet another calculated maneuver. It caught the Little Tokyo Club uncharacteristically “flat-footed.” Yokoyama’s death was in itself a surprise that the Tokyo Club was not prepared. Moving the Toyo Club to an unfamiliar location further enabled Yamamoto to control the situation and dialog. It implicitly and explicitly showed who was in charge, and established the upper hand in controlling the relationship with the Tokyo Club. It was a brilliant maneuver.

The Tokyo Club returned to Los Angeles to regroup. And, of course, Sera himself was now on notice by not just the Toyo Club, but by it’s own people internally. Was the Tokyo Club “slipping” in a yet-to-be-fought power struggle with the Toyo Club?

Yamamoto’s successful confrontation with the Little Tokyo Club was a necessary tactical first step as the new boss of the Toyo Club. Strategically, he decided there were three things that needed to be done, now that he had unceremoniously and unequivocally taken control. First, he needed to assert his dominance over the Little Tokyo Club. Second, he needed to cleanly exit the wholesale opium business. Third, he needed to pivot to the larger cause. These three goals were synergistic – executing on one re-inforced the success of the others.

Exiting the drug business was surprisingly easy. Just stop and stop now was Yamamoto’s mandate. He was brutally unconcerned about loss of jobs or the moral obligation to provide for employed people. He was equally unconcerned about abandoning capital equipment. The business was so flush with cash; there were little financial obligations to service. The club could walk away and take a loss. Of course, boats, warehouses, and other infrastructure could often be salvaged and re-purposed so this was not a complete loss. The fishing business would continue to thrive. With Capone now out of the picture and his retail drug empire in a disarray, walking away from those relationships were relatively easy. And, of course, the related nastiness and violence stopped nearly overnight as Yamamoto stopped the drug transactions. Further, potential conflict over drugs with the Little Tokyo Club immediately quieted. It was a great moral relief as well for Yamamoto. Drugs were a business he never really wanted to be in.

Curtailing the drug business had two downsides – loss of income (obviously) and loss of control. On the supply side, the wholesale business was immensely profitable for the Black Dragon Society and upstream opium providers. Downstream, the margins were less lucrative, but still cash cows. Further, by running the business, the wholesale and distribution business, the Toyo Club had great reach not just into Capone’s network but into the Little Tokyo Club as well. Yamamoto was unconcerned with the loss of Capone’s network but the loss of control over the Little Tokyo Club was of greater concern. How could the Toyo Club continue to effectively operate in California and Mexico?

The Toyo Club had much cash on hand from the drug business. Further, gambling, small business protection, fishing/canneries, and prostitution would continue to be profitable. While the loss of the drug business would be significant, the Toyo Club would ratchet up the other businesses. In particular, gambling, prostitution, and fishing/cannery operations.

Yamamoto’s success in business, especially in the drugs, was as surprising as it was admired. Yamamoto had little education and even less experience with business. Perhaps because he did not know what he did not know with respect to business, he was never concerned as to how hard it was to build a business, legitimate or otherwise. While it was hard to truly know because of the complex accounting needed to obfuscate the books from the public and federal authorities, Yamamoto grew the Toyo Club’s top line business from several million dollars a year to nearly one hundred million dollars a year. Most of this came from the drug business but the established business lines of gambling, prostitution, small business protection, and fishing/canneries also grew significantly. Yamamoto showed not only the ability to be a “startup entrepreneur” but a successful operator who could scale and manage a large diverse organization. He brought sanity to an “industry” known mostly for thuggery, violence, and vice, not operational excellence.

Yamamoto knew the Little Tokyo Club’s syndicate was in disarray. It’s relationship as opium provider gave him insight into the Club’s operations. He was able to watch its overall operations, but was particularly interested in its gambling operations. Because the Toyo Club itself was getting out of drugs, gambling was the best fit to exert power and control and extract revenue. First, he reasoned, he would offer friendly strategic advice and consultation. Then, operational services. The two-phased approach would allow him to first understand the state of the business. Then, as an operating partner, he’d provide functional value and extract financial returns. Getting the Little Tokyo Club stabilized and under control would be a key step to neutralizing conflict. Growth and revenue would follow.

Immediately upon Sera and his henchmen’s departure from Seattle, Yamamoto went to Los Angeles – to meet Sera at the Little Tokyo Club. To shore up his relation ship.

While his seizure of power at the Toyo Club was top of mind, the Mudken Incident was a close second. This was clearly a pivotal event for Japan, much as his ascent to the top of the Toyo Club was important to him. The wave of nationalism crashing across Japan was now washing up on the shores of America. With it, comes a greater cause. Make Japan Great. The Toyo Club would support that cause – and the Tokyo Club should too.

It was a ploy to defuse the potential threat from Sera and the Little Tokyo Club. If they joined forces to support the greater cause, conflict between the two clubs would held at bay. At least for a while.

Yamamoto arranged a meeting at 317 ½ Weller, a few blocks away from the Little Tokyo Club. The location was the office of a Doctor Furusawa. There, they would be out of the watchful eye of the Tokyo Club, in case things went awry. Further, Furasawa was also an agent of Japan growing importance. Sera was aware of this – it legitimized Yamamoto’s visit and sincerity of the offer he was about to make. When he arrived at Furasawa’s office, Sera was all ready there. Yamamoto entered the nondescript building and was escorted to a back office. Sera was waiting.

As customary, Yamamoto disarmed himself, placing both of his guns on the table in front of him. It was simultaneously a signal to remove threat but paradoxically a menacing symbol of power. Sera responded in kind. It was only the two of them in the office.

“Yokoyama’s death was an unfortunate and untimely tragedy,” Yamamoto begins. “Such surprises can be destabilizing. Who is in charge, who controls what, who gets the spoils.”

“There is no reason for conflict between us. I come in peace. I come to help. But more importantly, I come to join forces for a greater cause,” Yamamoto continued. “We are committed to Make Japan Great. Our allegiance is clear. We are aligned with the Emperor and the Sun Goddess. The Toyo Club will help. Will you?”

Sera too has contemplated this. He too was on board. He nodded in affirmation.

Yamamoto then asserted power. He revealed his relationship with Toyama. He shared the fresh knowledge that he as received from Toyama and the Japanese Imperial Navy. He told of secret details known by only a few. He impressed upon Sera of his knowledge, and, therefore, the relationship he held – relationships that Sera did not have.

“Money is paramount. We will direct money appropriately. Are you on board?”

Again, Sera nodded in agreement. He realized that Yamamoto has outplayed him.

“Good,” confirmed Yamamoto. “How can we help?” Without waiting for a response, he asserted, “We can help you grow revenue in Pismo Beach, San Luis Obispo, and Santa Ana.” Yamamoto knew these were problematic clubs for Sera. Yamamoto placed his hands back onto his guns and impulsively rubbed the engravings of “Tanaka” on his .38. It’ was an offer as much as a threat. An offer Sera could not refuse.

Yamamoto rose from the table, Sera sighed, and Yamamoto walked out.

In a short meeting, he had asserted his authority on Sera and the Tokyo Club. His work was done.

From No-No to Win-Win: Injustice, Copyright, and Japanese-Americans

In May of 2019, Penguin Classics re-published “No-No Boy” by John Okada. The novel is the story of a Japanese American man’s struggle ... 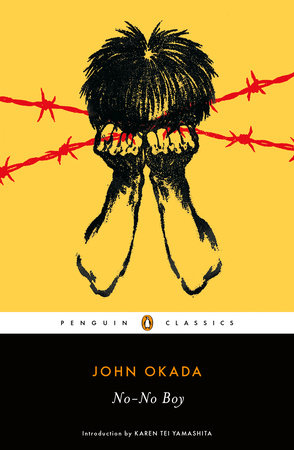